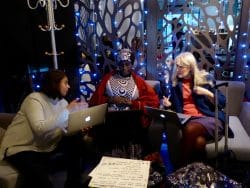 In order for a Book Sprint to be a Book Sprint, it has to follow a rather particular methodology. A crucial facet of that, and what we have come known for, is that the group has to start with a blank page. We regard this rule so highly, that it’s even in our slogan “from zero to book in five days”.

We don’t allow any pre-written content to enter the room, not even an outline. We often get asked to bend these rules and we always say no. Everyone needs to start from the same place and write what they know. This is what allows true collaboration to happen from concept to finished product.

So it was quite unusual to find myself with a group of people last week in what the organizers named a “Write Workshop”. From our side, we counted it as one of a number of experiments we have decided to respond to as part of a new project we’re calling “Sprint Lab” where we get to design new facilitation methodologies for clients who need something different. By June this year we will have tried out a curriculum design Sprint, a conference documentation Sprint and this editorial Sprint. More on all of those soon.

In this particular Sprint, one person in that group had already written two-thirds of a synthesis report on a major five year programme headed up by Hivos, the ENERGIA Gender and Energy Research Programme. The other participants in the group had played a role in the research program too but no one knew the evidence as well as the original writer did. The goal of the workshop was to finish that report, incorporating the inputs and the feedback from this larger group, members from their technical advisory group.

In order to get an overview of the kind of work they might want to do on the document before we entered the room, we asked everyone to send us 10 high-level tasks to do to the text. Surprisingly (or not surprisingly?) we received about 60 unique comments on the text. With the group in the room we clustered these and tried to prioritise them to create a task-list for what needed to be done over the 3 days we had together. The more we tried to prioritise though, the more it become clear that the group had not actually reached some fundamental agreements like who the audience was and the key messages to deliver to them. Or maybe they had and now just because the text was in front of them, these questions automatically arose again?

While the mandate had been to finish the text, what ultimately ended up happening was that the whole thing came under the microscope and needed to be reworked. The fact that it was perceived as just an editing job was also perhaps part of the problem. I think it gave participants a false sense of security, that there was not that much to do. When we do a Book Sprint people feel the pressure of that zero on day 1.

At the end there was unfortunately not enough time to deal with all the issues which came up and the report still needed another day or two of concentrated effort. The organizers say they are 80 % finished and have a clear plan for two of the group to push through the final 20 % which is progress from where they were a few months ago, trying to collect and handle comments from a large group over email. The Sprint definitely shortened and streamlined their process and helped to make some decisions with the key stakeholders. But it’s pretty difficult for us to leave behind a partly-finished document after a Sprint and it’s got us curious how to get it right, so that we could offer an “editorial” or “finishing sprint” methodology for all of those people struggling to get their collaborative documents done. Let’s see who else comes our way.