After four long days we finished the book „Lost in Führung“ with Die Akademie für Führungskräfte der Wirtschaft. The first day was mainly focused on discussions of the concept, scope, and structure of the book. On the second day, the ten participants wrote the first chapters, while editing and revising simultaneously. Then they became really productive by day three, more than doubling the content written. To keep up with editing those new text passages, the last two days were a sprint within a sprint. Some chapters had seen major work and were revised one last time, some examples and tools didn’t make the cut, last images had to be inserted. And then we had a book!

A real challenge in the monastery was the internet connection, since we work mostly on our online collaborative writing platform PubSweet. Many places in rural German still don’t have broadband networks, despite all political promises. When it comes to digitalization, Germany ranks on 17th place among 63 industrialized countries, according to The “World Competitive Ranking” from the IMD Business School in Lausanne.

And then the monastery walls, build 700 years ago, were thick enough to allow phone reception only on the window sills of the outer walls. A great and beautiful place for a retreat, with impressive baroque architecture and surrounding sunflower fields. These kind of places are ideal for the deep concentration of a Book Sprint, and there are ways to deal with slow or now connectivity. Had I known about the connectivity issue, I would have brought a local server for our platform. That is what we do when we go to remote places such as Burundi, Ethiopia, or, well, rural Germany.

In the end, the relaxed, patient and zen-like attitude of the participants made up for the slow connection. We devised some analog tools to organize ourselves offline, and waited patiently for our turns to access the platform online. And that way, we worked our way to the end of the book. On the afternoon of day four, we chose a book title and toasted with a glass of sparkling wine. Congratulations! 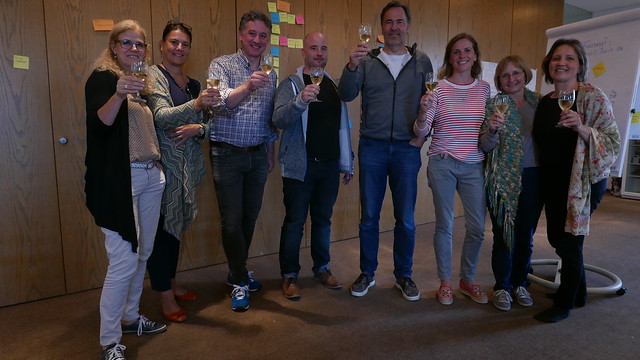 Toasting to “Lost in Führung”