Recently Adam Hyde, founder of the Book Sprints Methodology, has been assisting the Public Library of Science to develop a new platform. As part of this process PLOS hosted a Book Sprint to document the emergent platform. While documenting a platform not in production might seem odd the intent was to utilise the event as a rich user feedback session as well as a documentation procedure.

The book was written in a short 2 day Book Sprint. The purposes of the event was two fold:

By far the most important was (2) – feedback. Documentation requires a close reading of software and there are few evaluative processes that can match a documentation team working at close quarters. Their discussions explore the software, reveal paradoxes, question assumptions, raise new ideas, and help force paradigms into alignment. Running on the safe knowledge that you cannot document a software by memory or through the lens of a developers/designers intentions it is best to exclude developers and project managers from the process and allow the team to freely question the software through clicks and drags while the development team sit aside and listen and learn from the outside.

So, it can be said that the team of 5 PLOS staff inhabited the new platform for 2 days and were free to explore the software without restraint or preparation. Infact when the documentation process started they had no instructions other than to ‘try’ the software before they turned up. The result is not just a document of how the platform works pre-MVP but it is also a document of frustration for what the platform can’t yet do or do well in its current state as well excitement for what it can do now and what lies in the future. We wanted all of this captured so it’s all in the book – it is a how-to as well as a list of recommendations for future functionality.

The feedback was extremely rich and contained excellent insights and recommendations from people who will need to use the software on a daily basis. 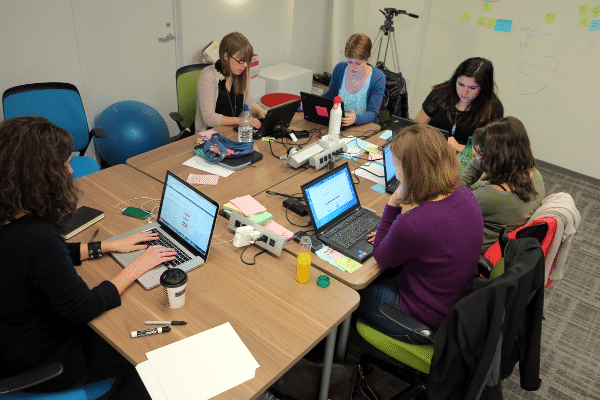 For the next steps we will integrate the ‘Developer Recommendations’ featured at the end of each chapter in discussions as we move forward with building out the framework and functionality.

This Book Sprint was facilitated by Book Sprint trainee Amanda French under the tutelage of Adam Hyde. More about Amanda in future posts!