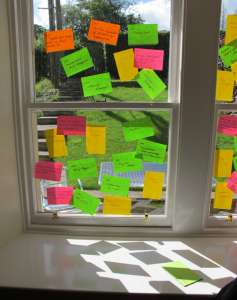 A Book Sprint started today in Edinburgh (Scotland) with 4 members of CETIS (Centre for Educational Technology and Interoperability Standards). The aim is to produce a booklet about UKOER, and the lessons learned.

Its a very good group of committed OER specialists and I am learning an amazing amount about the UK specific OER issues and having great conversations about OER in general. Attending are:
Amber Thomas, Lorna Campbell, Phil Barker, and Martin Hawksey.

The morning started with a delay as Martin was called away for Jury service but thankfully the court case was delayed somewhat. So we could start with Martin but not until 11.30 which is one and half hours later than expected. In a 5 day sprint this is not too much of a problem but we now have extra time to make up since this is only a 2.5 day sprint.

First we discussed the target audience and the expected topics to be covered. This lead into the creation of post-it notes with thoughts about the readership and the thoughts they should ‘take away’ after reading the booklet. These notes were placed on the windows and then organised into groups.

Two sections in the book have emerged from this initial session:

The target readership is mainly those involved in managing or creating OER projects who are also technically inclined.

There will be two more sections that could be added but we are taking these initial 2 sections on first. 3 of the team is focused on the second section – each tackling a chapter with the goal to finish each of these by the end of the day.

You can follow the sprint at http://www.booki.cc/oer-tech/_edit/ [no longer online]

After a few hours writing we are up to 7000 words. To help with a consistent reading experience we made a chapter format for the second section (technical issues and lessons learned). These rules are on the window of the sprint room in clear view to remind everyone of the items that need to be covered.