**Updates on May 2021: the book will be published by MIT Press and is available for pre-orders! Find the link through the button “order the book here”.**

The book ‘Open Knowledge Institutions: Reinventing Universities’ is open to a wider community for review and editing before it gets pitched to publishers. 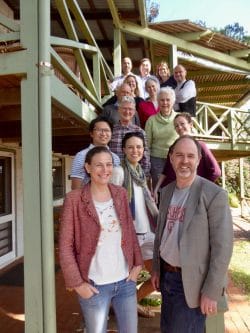 The book was written by a group of 13 authors including research professors, open knowledge advocates, science communicators, economists, publishers, high-level university administrators, librarians and others. Organised by Curtin University, it is the outcome of the group’s debates over the course of the Bookd Sprint and aims to provoke a conversation about the role of universities in society. So what better way to start that conversation than to place the book on a university press platform for open review?

Cameron Neylon and Lucy Montgomery, who participated in the Book Sprint, feel that the book has the potential to make a great impact when it is published.

“I think it’s well suited to publishers and to delivering a buzz. The authors are all relatively high profile or with social media presence and good at communicating, so they will do all the buzz-making that publishers are looking for,”says Lucy.

The authors have already produced op-eds in anticipation of the launch of the book and they will lead a social media effort to make sure the book generates the discussion they feel this topic really needs.

The Book Sprint delivered a lot more than they initially expected, say Cameron and Lucy. When they planned the Book Sprint in a project proposal, they saw it only as a kick-off meeting for a new project. They thought that it would be a good way to engage a group of people who would then be interested in working with them further. In the end they got much more than this.

First, they were more productive than they expected: “In our field there is so much time wasted bringing people together for meetings and the end product is just a list of bullet points.The fact that we got that group of academics to produce that document in the time that we did, that’s huge. If we had tried to do it alone, it would have taken a year,” says Lucy.

Second, the experience of building an argument for this issue together really coalesced the group. “It is a very good way to get to some kind of consensus point very quickly,” says Lucy. “The fact that everyone has to agree to put their name on the book is powerful and so is the fact that they have to agree to commit to work on this topic for a week. With this Sprint we were able to create a community and buy-in around the topic very quickly.”

Cameron agrees: “The community-building aspect and the participants’ desire to get behind the agenda and publicise the agenda will be one of the lasting impacts for us. It’s not something we planned for.”

Take a look at other academic books we produced in our continuously growing library.